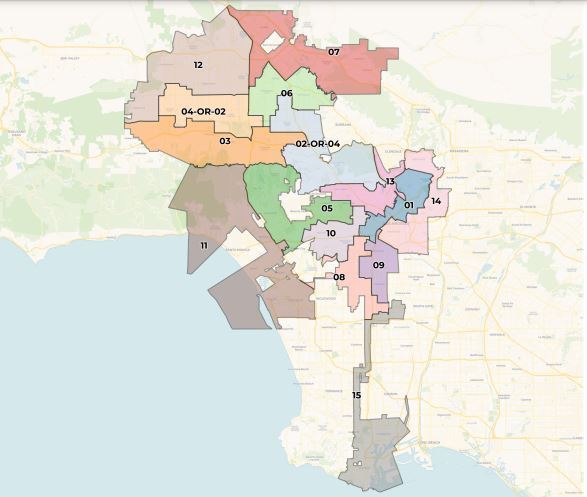 The citizen commission charged with creating new political boundaries in Los Angeles finalized its City Council map Thursday but declined to say which areas should be represented by Paul Krekorian and Nithya Raman.

The proposed map, which heads to the council at the end of next week, would significantly redesign the Krekorian and Raman districts.

The 21-member commission left it to the council to decide which of the two would be assigned to represent a new district proposed for the west San Fernando Valley, which would include Winnetka, Reseda and other neighborhoods. The other would be assigned to a district encompassing the Hollywood Hills, Griffith Park, North Hollywood and other areas.

Raman, who took office in December, represents the 4th District, which stretches from Hancock Park to Silver Lake and north to Sherman Oaks.

How much the council will seek to rework the commission’s proposal is not yet clear.

Hours after the vote, Raman said the map had “unacceptable inequities and needs to be changed.” Krekorian has repeatedly promised in recent weeks that he would seek to rework the proposal.

During Thursday’s deliberations, Commissioner Jackie Goldberg said the decision not to label the two districts made it more difficult for voters in those areas to weigh in on the redistricting proposal.

Goldberg, who voted against the map, decried the idea that Raman could be assigned to a West Valley district that’s entirely new to her, one year after taking office.

“There is no precedent for stripping a first-term council member of 100% of their constituents,” said Goldberg, a former city councilwoman who sits on the L.A. school board and was appointed to the commission by Raman.

Other commissioners pointed out that several of the Valley’s neighborhood councils had taken positions against the map.

“The Valley is in turmoil,” said Commissioner Rachel Torres, who was appointed by Council President Nury Martinez and also voted against the map.

Commissioner Richard Katz disputed that idea, saying the plan heading to the council would achieve a major goal: placing five districts and the vast majority of a sixth inside the Valley.

“We have achieved things on the Valley agenda for a really long time,” said Katz, who voted in favor of the map.

Backers of the commission’s proposal argued that it would achieve several other policy objectives: placing Koreatown in a single council district, ensuring the opportunity for Black or Latino representation in certain parts of the city, and consolidating heavily Jewish neighborhoods on the Westside into a single district.

“What the council does after this is up to the council,” said Commissioner Carlos Moreno, a retired judge appointed by City Atty. Mike Feuer, who is running for mayor. “But I think no one can really question that each of us, and collectively, we’ve done our best.”

The city redraws its council district boundaries every 10 years, after receiving data from the once-a-decade U.S. census.

After obtaining that information, city leaders must approve maps that give each district roughly an equal population and protect the voting rights of certain groups, including Black, Latino and Asian American residents.

The council’s map must be approved in time for it to go into effect on Jan. 1.